Vitoria (called Gasteiz in Basque) but often referred to with both names at once, is the seat of government and the capital city of the Basque Country and of the province of Álava in northern Spain. With beautiful medieval architecture and a twisty winding old town, Vitoria is a pleasure to roam about in. Lauded as a Green Capital of Europe, it has a belt of parks around it as well and is not far from mountains or sea. It is a multicultural city, ranked as one of the five best places to live in Spain, it also ranked first for cultural places per capita. It has a lively atmosphere year round with the tradition of fantastic and plentiful pintxo bars, and fine gastronomy. It is quite simply one of the most delightful cities in all of Europe.

What to do and see in the historic city of Vitoria

Vitoria-Gasteiz lies in a central position in relation to the other big cities of the region and is more or less an hour’s drive in each direction from Pamplona, San Sebastian, Bilbao and Logroño. Sitting on the north-western edge of the Rioja Alavesa wine region, there are several famous wineries not far from the city itself. The Pyrenees lie to the north, and the Basque coast is also under an hour away. Situated as it is, it is no wonder that it is a crossroads of rich cultural and historical pathways.

Vitoria, the municipality (which comprises not just the city but also the agricultural lands of 63 villages around), is the largest in the Basque Country, with a total area of 276.81 square kilometers (106.88 sq mi), and it has a population of 252,571 as of May 2019. It has an elevation of 525 m (1,722 ft). Surrounded by the beautiful green hills of the Basque country and close enough to the sea to have a coastal feel to the air, it is a lovely breathable city, and in fact has been named a European Green Capital and has won awards for its sustainable tourism. The center is encircled by six large parks, The Green Ring, and one of them has a series of lakes that attracts a large number of migratory birds. Vitoria is compact, and easily navigated. The medieval old town is gorgeous with the winding streets and old stone houses evoking the era of knights and brigands.

The site of Vitoria, like most cities of the region, was inhabited before Roman times. There is evidence of a primitive village named Gasteiz, but the origins of Vitoria are unclear. It is thought that the Visigoths may have founded the city of Victoriacum in the 6th century in celebration of the defeat of the Vascones, though there is some dispute over the exact location of this city.

It was already a walled city though when Sancho VI ‘the Wise’ King of Navarra founded the town as a defensive outpost in 1181. Shortly after, it was besieged and captured by Alfonso VIII of Castile and annexed into The Kingdom of Castile. It continued expanding into the 15th century and remained a part of Castile thereafter.

In the 17th century, it was the site of one of the most famous battles of the Peninsular Wars, when French troops led by Napoleon invaded Iberia. An army of British, Portuguese and Spanish soldiers fought together under Wellington, against the French, under Joseph Napoleon, Bonaparte’s brother. The victory of Wellington’s men eventually led to the retreat and loss of French control of Spain. Beethoven composed his symphony opus 91 in commemoration, titled “Wellington’s Victory, or the Battle of Vitoria”.

What to See in Vitoria

Without a doubt the Cathedral of Santa María de Vitoria cannot be missed. It is such a singular cathedral that the famous author Ken Follet studied it extensively in order to use it as his model cathedral in his spectacular bestseller Pillars of the Earth. It is also featured in the well-loved mystery novel El Silencio de la Ciudad Blanca by Basque author Eva Garcia Saenz de Urturi, where Vitoria is the backdrop to a series of murders. Indeed the town and cathedral lend themselves to literary pursuits with an air of magic and fairytale. The cathedral itself was first a church that was destroyed by fire in 1202. Alfonso VIII then had it rebuilt as a cathedral-fortress, which served as the entrance to the city. It was built upon haphazardly throughout the centuries, giving it the unique and interesting shape it has today. It is currently under construction, but the construction site can still be toured, and contains recent archeological findings within as well.

The Basque Museum of Contemporary Art houses the best collection of contemporary Basque and Spanish art. For something a little different, there is the Fournier Museum of Playing Cards. Vitoria-Gasteiz is actually well-known for the manufacture of playing cards and the museum contains thousands of cards on display. The Arms Museum of Alava contains weapons from pre-historic axes to all kinds of medieval weaponry on up to 20th century handguns. It also has a reconstruction of the Battle of Vitoria.

What to Do in Vitoria

The aforementioned parks, the so-called green belt, feature a wetland habitat on the outskirts of the city, called Salburua. It is considered to be the Basque Country’s most valuable marsh, with bird-watching hides, wide open spaces, and deer wandering about. It is perfect for a nature walk or bike ride. The entire park system though, is worth meandering around especially on a sunny day.

The Casco Viejo or Old Town retains its medieval layout in an almond shape of ringed streets emanating out from the Santa María Cathedral. A simple but wonderful pleasure is to just wander around and soak in the atmosphere of another time, while stopping in for a coffee or beer at one of the many small traditional bars and cafés lining the streets. Stop by the Plaza de los Fueros where one may happen upon a game of pelota at the fronton – a walled ball court used for the traditional Basque sport. There is also a space for concerts and other festivities, with the requisite lines of cafés around it.

One of the joys of the region in general is to attend one of their local festivals. The one in Vitoria is quite spectacular. Taking place from August 4th to 9th, La Fiestas de la Virgin Blanca (White Virgin) begin with a bizarre ritual called The Descent of Celedón. Celedón is the symbol of a villager of Avala, a doll dressed in a beret, traditional blouse, and who flies beneath an open umbrella. No one knows exactly who he is supposed to be based on, but there is speculation the real Celedón was a bricklayer in the 19th century who frequented the bars of Vitoria and was in general a bon-vivant. His effigy’s descent is rigged on cords coming from the belfry of the Church of San Miguel. The doll comes down amid great celebration and cheering to the square below, and the festivities officially begin. For five days, the residents of Vitoria throw a non-stop party. People dress in traditional blue and white and the air is filled with constant music. Along with religious ritual, the fiesta puts on concerts, traditional dances, activities for children, gastronomic and artisanal fairs, bullfights, and of course, the indispensable fireworks show each night. 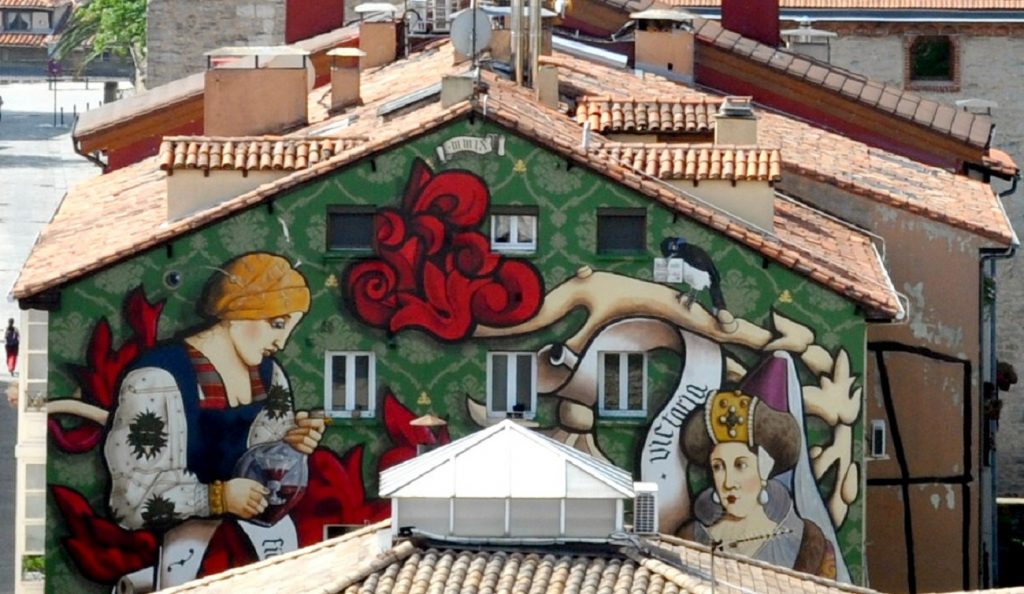 Where to Eat in Vitoria

You can never go wrong in Basque Country eating at a sidrería, or traditional cider house. Serving up enormous, mouth-watering wood fire grilled steak, juicy cod omelets and a red bean stew, the Sidrería Armentegi is a fantastic option. Don’t forget to get up and catch a stream of unlimited cider spouting out of ancient barrels in the wall. Letting the cider fizz against the side of the glass, this aerates the cider and brings it to life. Each barrel will have a different batch.

For fine-dining, there is the only Michelin starred restaurant in Vitoria, Zaldiarán. They present award-winning gourmet Basque food, such as hake cheeks in a pil pil sauce with clams, or the snails filled with a special house sauce.

To be at one with history, the Restaurante Portalón has an incredible atmosphere and story book feel to it. It’s a converted 15th century inn and coachhouse, with heavy wood beams and décor, creaky floors, and eccentric stone work. They serve traditional, hearty cooking with beautiful fish dishes, big steaks and plenty of fresh vegetable plates to choose from.

Finally, Vitoria has a morning food market with hundreds of stalls selling everything from local Idiazabal (sheep) cheese to fruit and veggies and all kinds of fresh fish and seafood coming straight out of the nearby Bay of Biscay.

Make your stay in Vitoria unforgettable and discover its essence with us.

Only the best hotels

No personnel found, please create the personnel post to use the item.

Walking
You love to hike and are not afraid of a little sweat and some good uphills.
Our trip may include 12-15 km (7-10 miles) a day on various grades of terrain on a diversity of surfaces. Expect steeper climbs with phenomenal views and mountainscapes.

Biking
You love to bike at home regularly and can handle some sweat.
Our trip may include 40-60 km (25-40 miles) a day on rolling terrain with a few longer climbs rewarded with views and high points you will not want to miss.

Walking
You enjoy longer hikes with an incline or two and don’t mind pushing it a bit. Our trip may include around 6-12 km (4-8 miles) a day of walking on mostly flat terrain with a couple steeper but non-sustained climbs.

Biking
You ride your bike at home and are comfortable on a bike for a few hours. Our trip may include 40-60 km (25-40 miles) a day on mostly flat terrain and will include inclines and the occasional sustained climb.

Walking
You love to push yourself and can handle a longer hike with some sustained inclines and steep uphills. Our trip may include 10-15 km (6 -10 miles) on terrain that can be quite hilly and rolling with a few steeper climbs thrown in for good measure. The views will blow you away.

Biking
Test your mettle on off-the-beaten-paths that will stun and delight, along with legendary cycling routes in the north of Spain. You are an avid rider who loves to push themselves and enjoy the challenge of a big climb or sustained inclines. Our trip may include over 60-80 km (37 – 49 miles) a day in rolling hills with frequent climbs and even longer options available. You will be the master of your universe.

Walking
You like to go on walks at home but nothing that works up a sweat. Our trip may include around 5-10 km (3-6 miles) a day of walking on mostly flat terrain, with an occasional hill on well maintained trails or walkways.

Biking
You are in decent shape but don’t habitually ride a bike at home. Our trip may include 30-50 km (20-30 miles) a day on mostly flat terrain with a few small and achievable inclines.

Learn More
MAKE THIS TRIP YOURS

Your activity level will be exactly where you want it. Our itineraries are designed to accommodate everyone. For guidance, we have labeled each trip according to its activity level from Casual to Expert with four fitness grades.

Ver los niveles
Open chat
Hi there! Welcome to Northern Spain Travel. We are here 24/7 to respond to any queries you have
Powered by